Various Types of Banner Stands You Can Get

Various Types of Banner Stands You Can Get

In today’s modern business world advertisement is an important part and parcel of staying and expanding in the market. All the sectors of business use one form of advertisement or another.

A banner is one such form of advertisement which has become a common sight everywhere from product displays to retail stores to marketing events to tradeshows to corporate lobbies… and the list goes on. A banner stand is a stand with easy setup and high portability.

It is used to display banners and graphics promoting a particular business. Various types of banner stands are available in the market to cater to different needs of the business.

A retractable banner stand is the most popular type of stand. It works like a portable projector screen where the banner is automatically rolled to the base of the stand.

It is very easy to set up and disassemble by simply rolling the banner up and attaching the headrail to the top of the support pole or removing the banner and rolling it down into the chamber at the base. The retractable banner stand can be single-sided, double-sided or telescopic.

Pole banner stand is the most economical of all types of stands. It does not employ an automatic recoiling technique for the banner display.

Rather in its case the banners are rolled down manually and stored separately in a protective tube or case provided for protecting the advertised display. It is lightweight and can be transported easily. Pole banner stands can be single-sided or double-sided.

It can be of any shape and size and can be adjusted in height too. Some pole banner stand comes with additional holders which can be used to hold brochures or can be used as a literature rack. 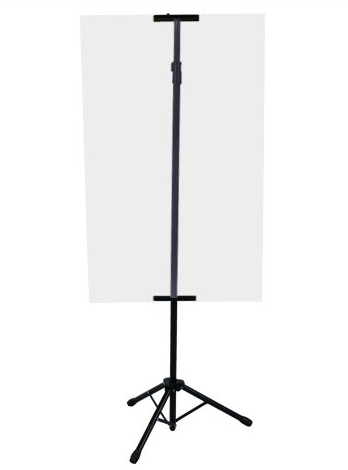 Wall banner stand is a large size banner stand mounted on the wall with two or more pole support. It is used to display high-quality banner making a bold statement. This stand is not very portable.

An outer banner stand is the most durable of the banner stands. It is much larger in size than the other models of the banner stand. It is made up of heavier metal and is designed to withstand changes in climatic conditions as it is displayed outside. The banners used as displays are also made of high-quality material in order to sustain better in adverse conditions.

Some outer banner stand has a hollow base that can be filled with sand or water which makes the stand sturdier. Due to its gigantic size, this banner stand is less portable and is generally meant for long use at a particular place. This banner stand is used as flag banners and pole banner in areas like sporting events, fairs and even outside the corporate buildings.

Hanging banner stand is more stylish than a floor banner stand. It is hung from the ceiling and is three-sided or four-sided allowing the banner to be displayed on all sides. It is largely used to promote business in trade shows. However, the setup and portability of this stand are less convenient than the regular floor banner stand.

Tension banner stand is an advance over pole banner stand. It is intended for use in trade fairs or retail business. It works similar to pole banner stand except for the fact that it is made up of high-quality steel and is sturdier than the regular pole stand.

The pole support used in case of this stand is usually curved in ‘ X ’ or ‘ y’ shapes. It is intended to display high-end banners and is more costly than the basic pole banner stand.

A scrolling banner stand is intended for eye-catching displays. It has a small motor installed at the base or at the top of the stand which does the job of automatically scrolling the banner from top to bottom or vice versa at a given speed. This banner stand is available as a floor stand or can be hung from the ceiling or mounted on the wall.

Banner stands are increasingly becoming a popular mode of advertisement as they are easy to set-up, are cost-effective, highly portable, have adjustable heights and allow multiple uses.